The MyNextRace Midnite Run 2017 course is similar the same as the 2016 course around Liberty Village. Some new paths will been utilized making the course have fewer turns and less confusion. Head lamps not mandatory but may be helpful. Depending on the weather there could be either mud or icy patches on the route which is 80% paved concrete, some of the route is through gravel parking lots. Save your PB’s for another race!

The 5K run is in Liberty Village. There is a combination of mostly roads, paths and laneways (used by the Film Companies) for this route, plus the scenic Liberty Market Lane, some running will be through parking lots, and some sections are gravel, hard packed but trail shoes are not needed.

We remind all runners to be safe, have fun and don’t look at this as a 5km you want to go blistering fast in, 90% of the course is extremely well lit from street lights, the QEW billboard ads (!) and overall City of Toronto nightlife. Headlamps and flashlights are not needed but if you have one feel free to bring it. Only one small section is quite dark and we will have some temporary lights here. 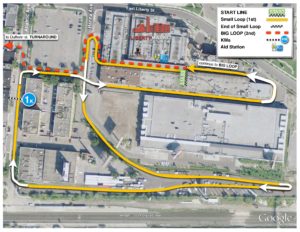 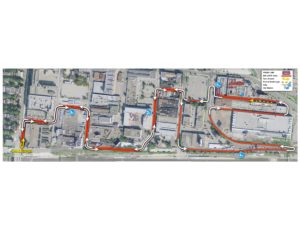 Hover over the images for information.